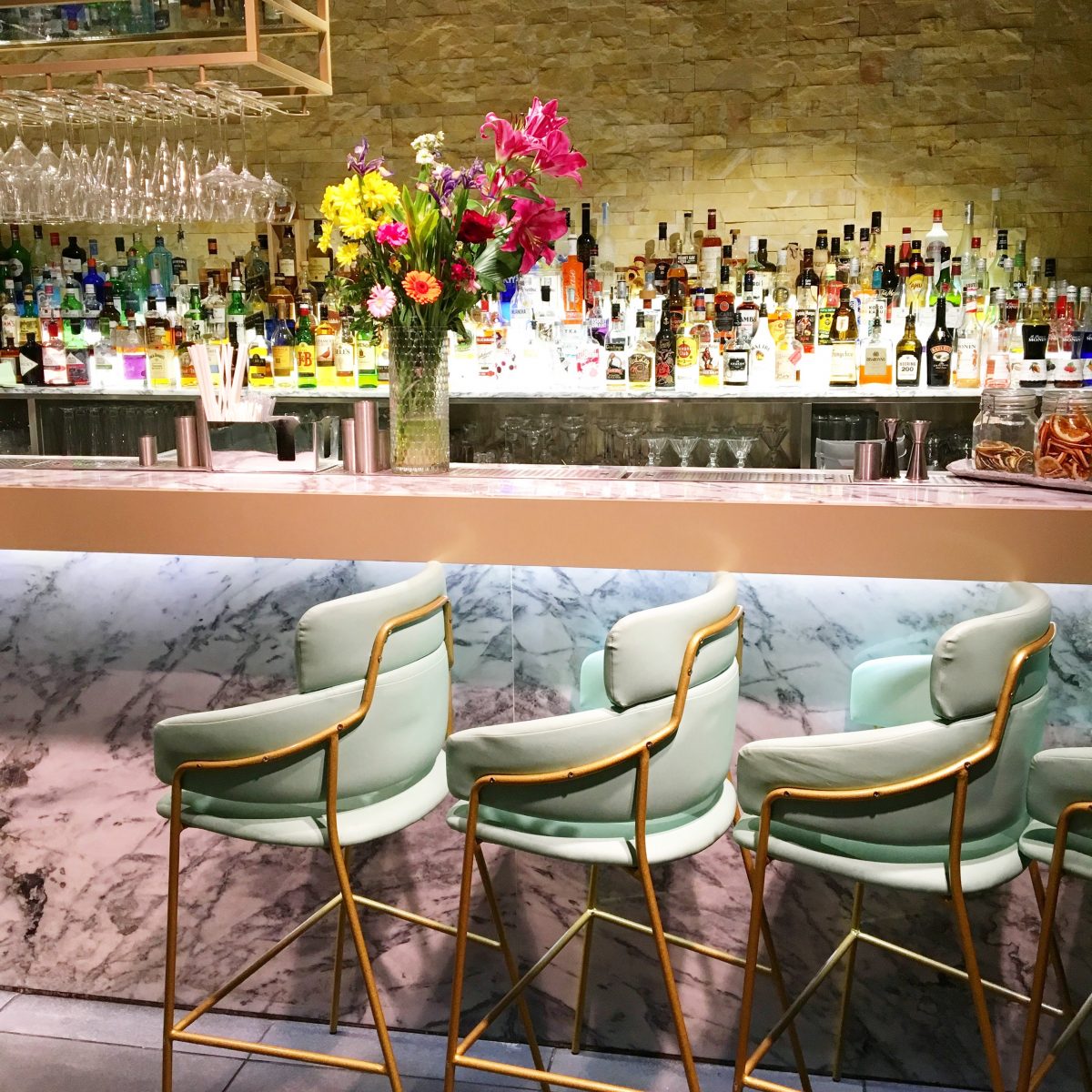 For my birthday Adam said we were going somewhere which was a surprise for dinner, and I genuinely thought we were just going to his mom’s or sister’s house as we’d talked about it. So with not a stitch of makeup on, wearing jeans, hiking boots and a blouse, we actually drove to Sheffield and went to one of the most upmarket restaurants we’ve been to in a long time. Ooops.

We’d seen Oisoi while dining at our favourite BBQ place across from it, Smokestack. We’d actually thought it was a sort of Japanese buffet style restaurant, as we’d seen glass cases with food and drink in. In actuality, we turned up and Oisoi is a contemporary Oriental fusion restaurant with an amazing interior and inventive menu.

Our first impression wasn’t great to be honest, Adam had made a reservation, we turned up five minutes late as we hit rush hour traffic, and yet still weren’t able to be seated for a good 15 minutes. It took ten minutes to ask if we wanted a drink while we waited, and as it was a Monday night, it wasn’t terribly busy. There seemed to be plenty of staff, so I’m not entirely sure what the problem was. I might have been more forgiving was I not super hungry. 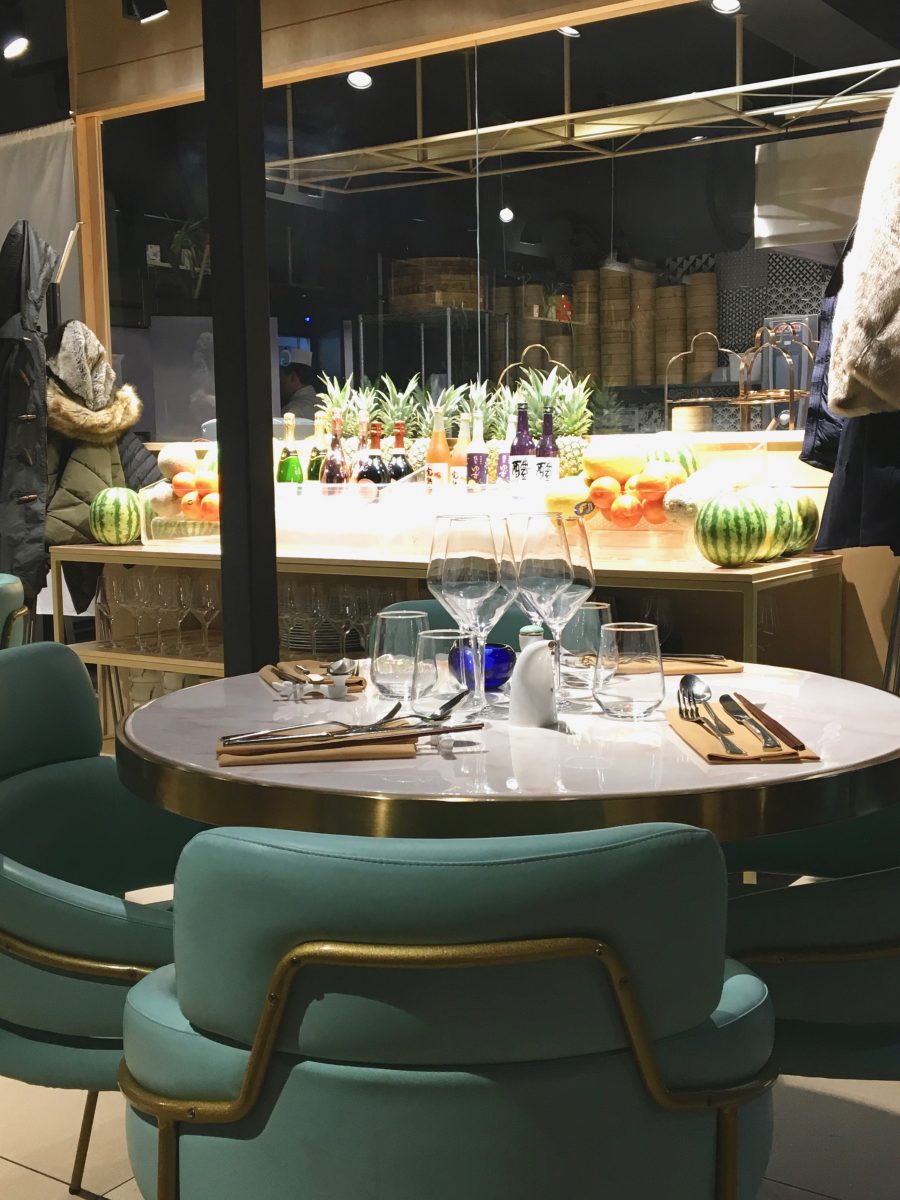 Once we were seated at our table however, the service was impeccable and I couldn’t fault it. It was like night and day to the start of our night. I loved the interior with it’s marble tables and plush teal chairs. Each table was beautifully set ready to be filled. You could see inside the dim sum kitchen, while the main kitchen was located upstairs in a seating area that wasn’t being used for the night.

It turns out what we thought were buffet cabinets were filled with bright coloured desserts, fruit and drinks. Not of the help yourself variety. 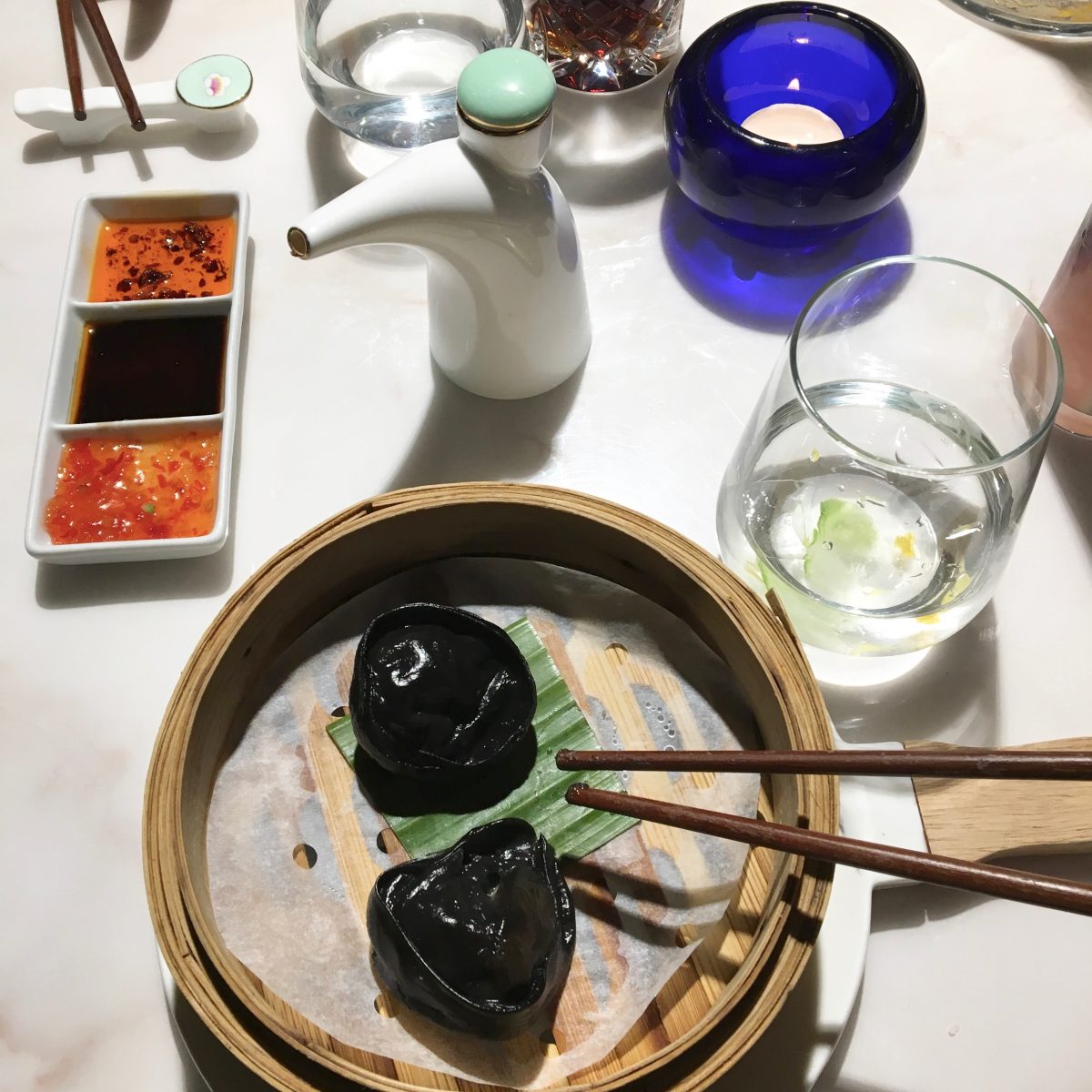 As we were quite hungry, we opted for starters. We chose to go for a light dim sum as after having a look at the mains we both decided on ones that looked quite substantial. I had the fresh scallop dumpling wrapped with squid ink (pictured above) while Adam went for a steamed vegetable sticky rice roll. He let me try a bit of his, which was really nice and flavourful for a veggie option.

Adam isn’t that into seafood, so while I thought my scallop dumplings were the most delicious thing, he wasn’t a fan of the bite he tried. I however was so excited about mine that I ate one before I even grabbed a photo, and even more excited once I’d tasted one that I forgot to get any the veggie one. What can I say, I get excited about good food. 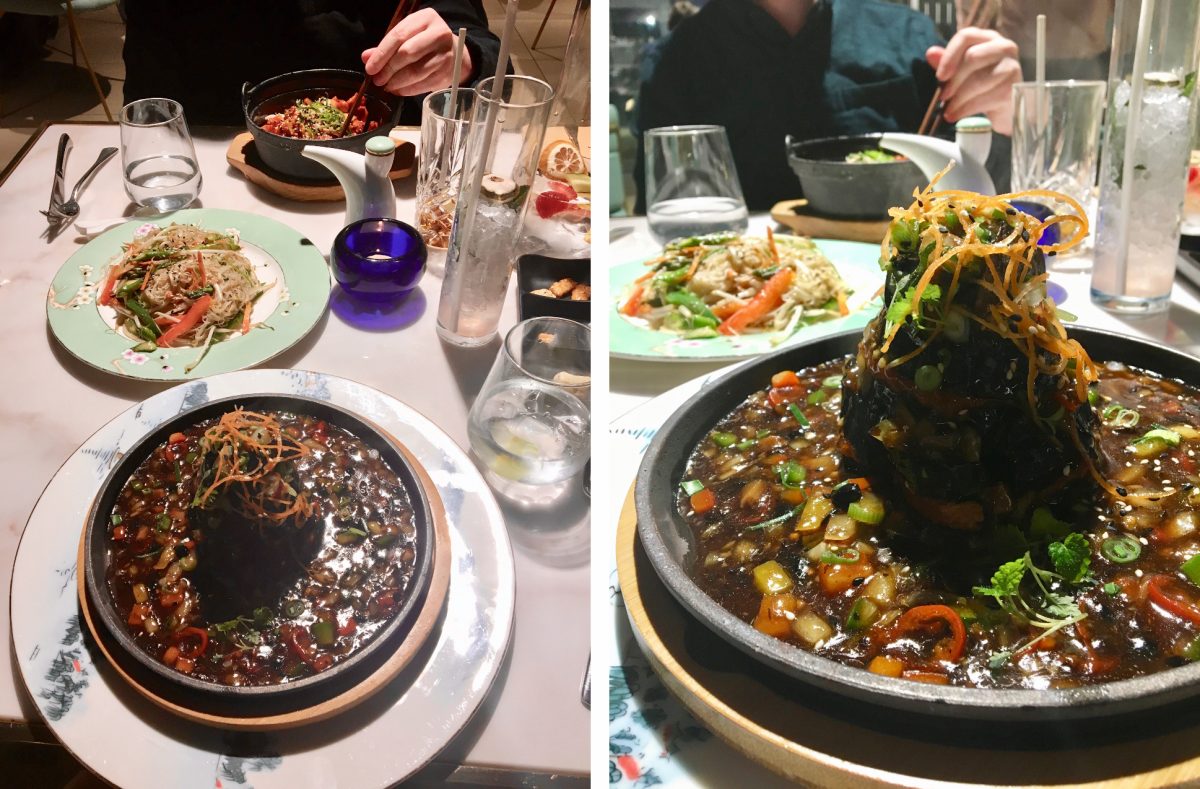 For mains, I went for the Black bean Minced Pork & Prawn Aubergine Tower as there were photos on the menu and it looked intriguing, but I was torn between that and Adam’s pick of Artisan Kimchee Pan Fried Chicken. I was quite happy he’d gone for that so I could try it, and if we went back I’d happily choose the chicken for myself as it was so nice. My stack was really good as well, but you couldn’t tell that the patties between the aubergine were prawn and pork, those flavours were lost to the aubergine and black bean sauce. We also ordered a portion of vegetable fried noodles to share. 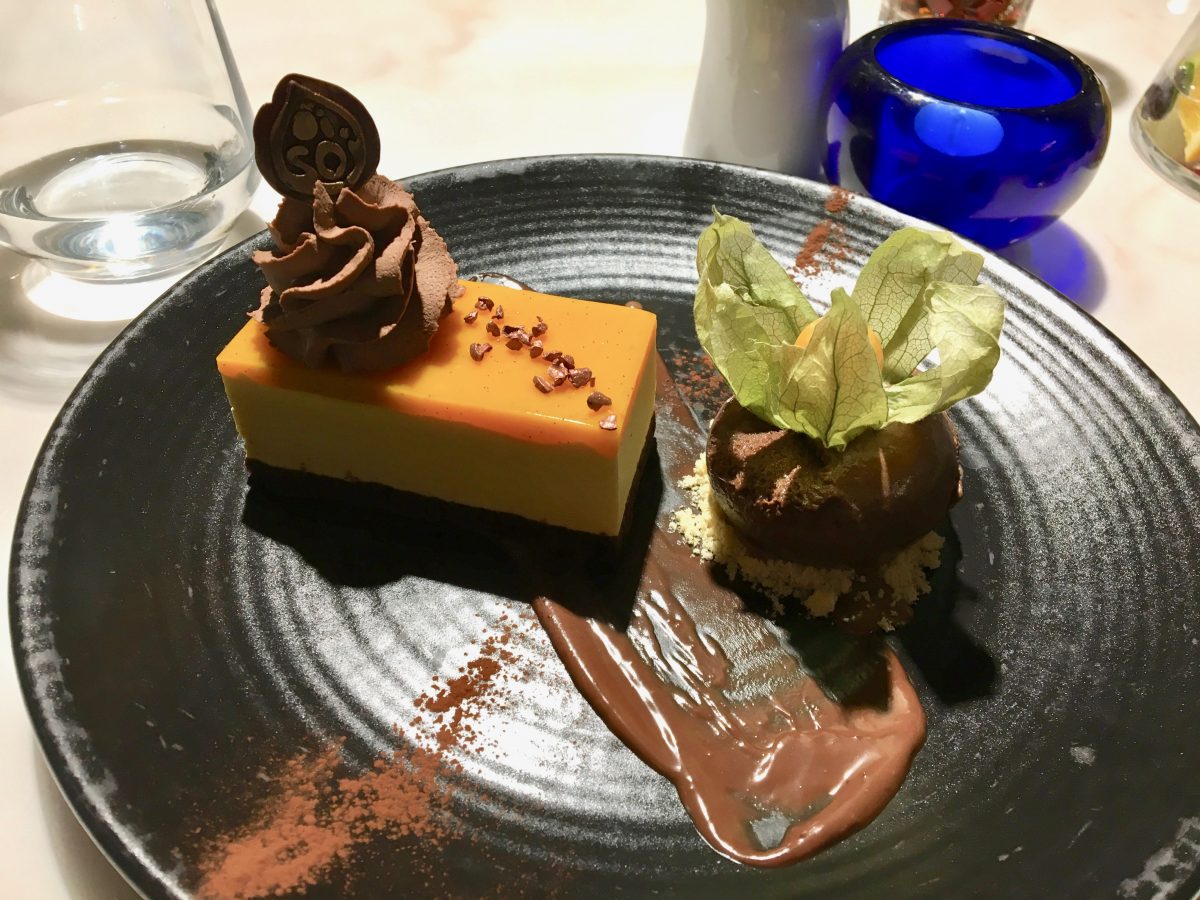 After seeing all the desserts in the glass case, and as it was my birthday, we opted to share a cake as we were quite full. It was a shame a few things weren’t available, but there were still some good choices left. Mango & Chocolate Delice sounded like an interesting combination, and the ice cream alone was worth it. Rich and delicious ice cream complimented the light and foamy cheesecake perfectly.

Overall we really enjoyed our meal, and it was a great birthday treat. We’d definitely go back and try more things on the menu as we had a hard time actually coming to a decision. They also do a dim sum afternoon tea, which I have my eye on to go with Sarah as there’s a lot of seafood and Adam just isn’t interested.

Of course I snagged the chocolate coin on the dessert, my birthday after all.

If you want to have a look at the lunch, dinner and dim sum afternoon tea menus, you can find them on the Oisoi website.