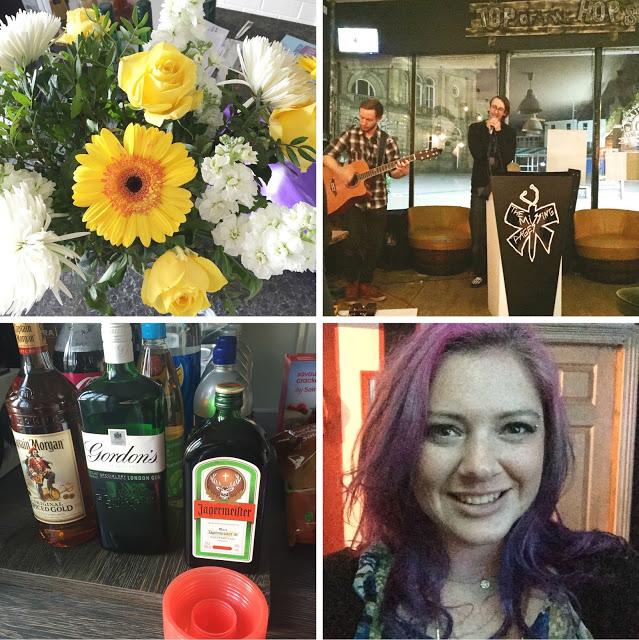 There has been so much going on since I got back from America! Which is good, but I was definitely looking forward to this past weekend when we didn’t have any plans. We filled it of course but at least it was with stuff we needed to get done around the house. For those of you who may be new here, (Hi!) I normally round up photos I’ve taken on my phone to document what’s been going on and write a Life Lately post.
Weekend before last, I arrived back to England Friday afternoon and was out in town listening to bands with Adam that night. It was Mapfest in Doncaster, which we look forward to every year, but unfortunately it was a bit of an alcohol fuelled weekend so we didn’t see as many bands as we’d have liked. Saturday night it was our friend Kyle’s birthday, and Bev brought out the above alcohol. I hadn’t done a Jagerbomb in forever, and swiftly remembered why. Gross. I stuck to Gin for the most part, and then took a bar bathroom selfie when we went to town, as you do. 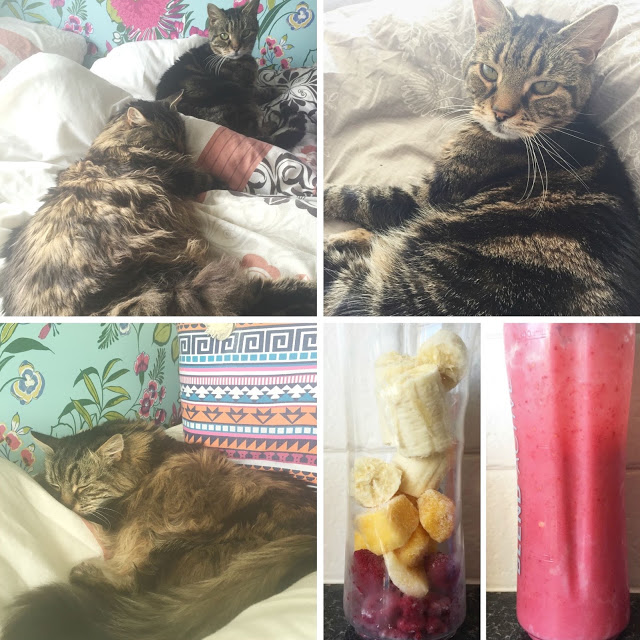 The kitties have been extra snuggly, they must have missed me while I was in America. I think it’s starting to wear off now though, they realise I’m back for good.
Adam bought a Blend Active blender, and I love it so much that I bought a bottle for me to use too. The blender itself that came with a bottle was £20, but it cost me £10 to buy another bottle! Bit ridiculously expensive if you ask me, but I’ve already used it loads so I’ll have to live with it. It blends like a dream, even frozen strawberries! It puts my smoothie maker to shame.

Mid-week Adam and I both were getting super restless so we took advantage of a warm sunny night to go to Clumber park for a walk. We were there at golden hour and the light was amazing, I so wished I had my proper camera. The heather was bright purple and we found a new path with sheep grazing in a field. It was perfect. 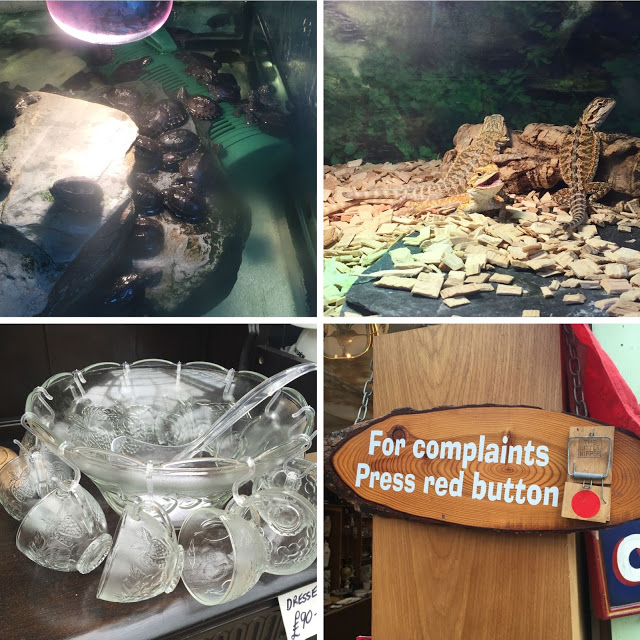 Saturday we decided to go and buy some much needed things and ended up at a garden centre near us that Adam had only just discovered through his sister. They had a pet shop on site and I reeeeeeally wanted to come home with a bearded dragon. I’ve always wanted one, but we had an iguana growing up instead.
We then went into the garden centre part, and there was a whole section devoted to antiques and gifty things. I really wanted that punch bowl, because, look at it! And with all the cups! But I honestly didn’t know where I’d put it, when/if I would actually use it, and Adam said no freaking way.

I also bought a circular saw on Saturday because we are amassing power tools. I want to build all of the things. The first project was some stairs so our cats can get on our bed. I know this sounds ridiculous, and it is a little, but they are going to try to get on it anyway, and I’d rather them not hurt themselves doing it because they are getting up there in age. We had previously been using a suitcase for them to hop up on, but even that wasn’t working so well. The stairs aren’t perfect, but I’m actually impressed with my skills using the saw for the first time.
We had some friends around Saturday night for a fire, and Fran and I made smores since I brought graham crackers back from America. It was nice catching up with some friends we hadn’t seen in a while, and a great chilled out night.

Sunday although I didn’t drink all weekend, I had the worst headache and felt hungover. Sods law. So I didn’t actually get as much done as planned. I did however manage to eat a good amount of salt water taffy my grandparents got me from Oregon, have lazy Sunday snuggles with Crash, and bake my first ever Yorkshire puddings.
That brings us to now, where before sitting down to write this post Adam and I were clearing out our closet downstairs and I lost patience with it. So typical Monday as well. We did manage to buy paint for our entryway though and a new lamp. House progress is always a good thing.
I feel like I’ve been out of the loop lately, what exciting (or even not so exciting) things have you been doing?