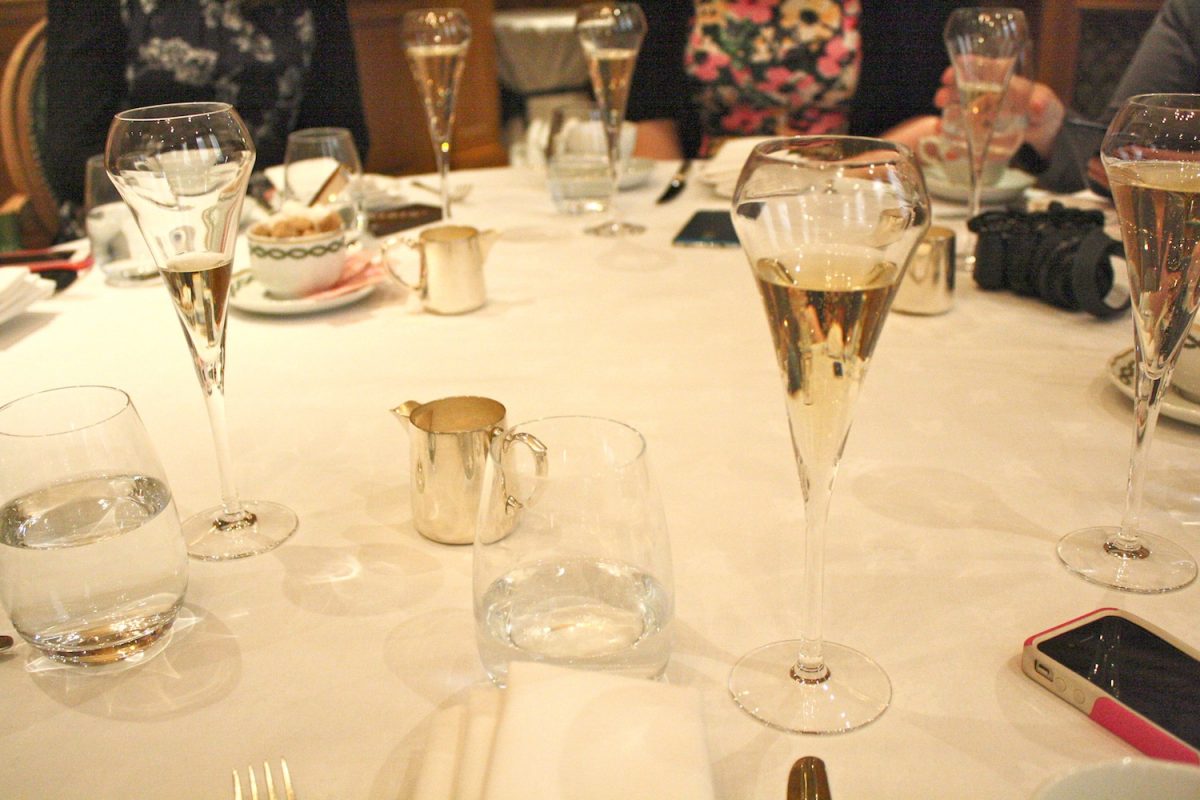 My main reason for going to London a couple weeks ago was to attend a London Bloggers afternoon tea. I’m not a London blogger, but I jumped at the chance to meet some lovely ladies and eat my weight in sandwhiches. I wish I was kidding on that last bit. Our table were the eaters for sure. We had most of our food demolished before the other two tables started on their desserts. Oops.

The Afternoon tea was held at the five star boutique hotel, The Milestone Hotel in Kensington. We were sat in a function room as there were 25 of us, but the normal sitting rooms for afternoon tea were so charming and comfortable looking. A man playing the piano was even tucked into a hallway to give ambience but stay out of the way. I checked in on him later on my explorations of the hotel.

We started off with glasses of champagne, which since I was a little hungover (standard London weekend then) helped to clear my fuzzy head. A little hair of the dog right? Needless to say as I had slept through skipped breakfast, the three tiered tower of goodies was a welcome sight. 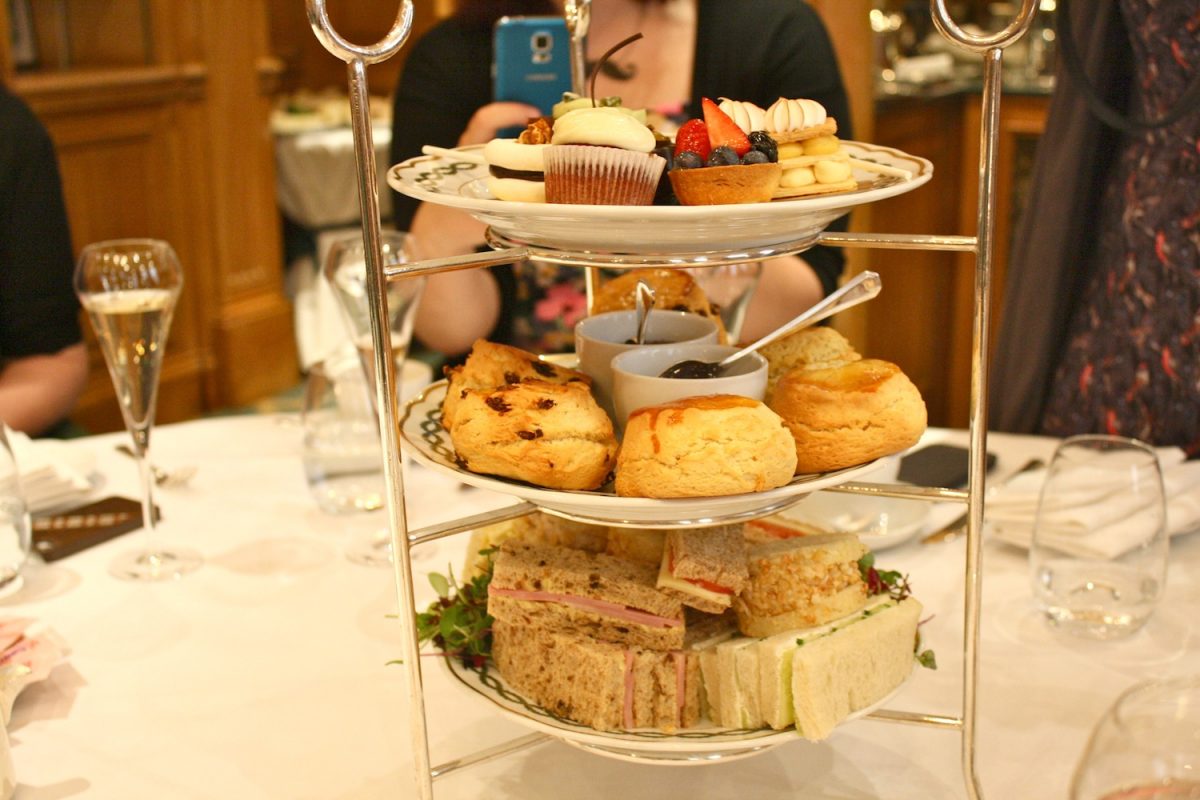 As this was a blogger event, the obligatory photos were taken before food was touched. Normally I’m on the ball with taking photos, but I just wasn’t into it. I felt like I couldn’t even see if my camera was focused (it normally wasn’t, I’ll spare you those pictures). I was much more interesting in eating what was on the plates. 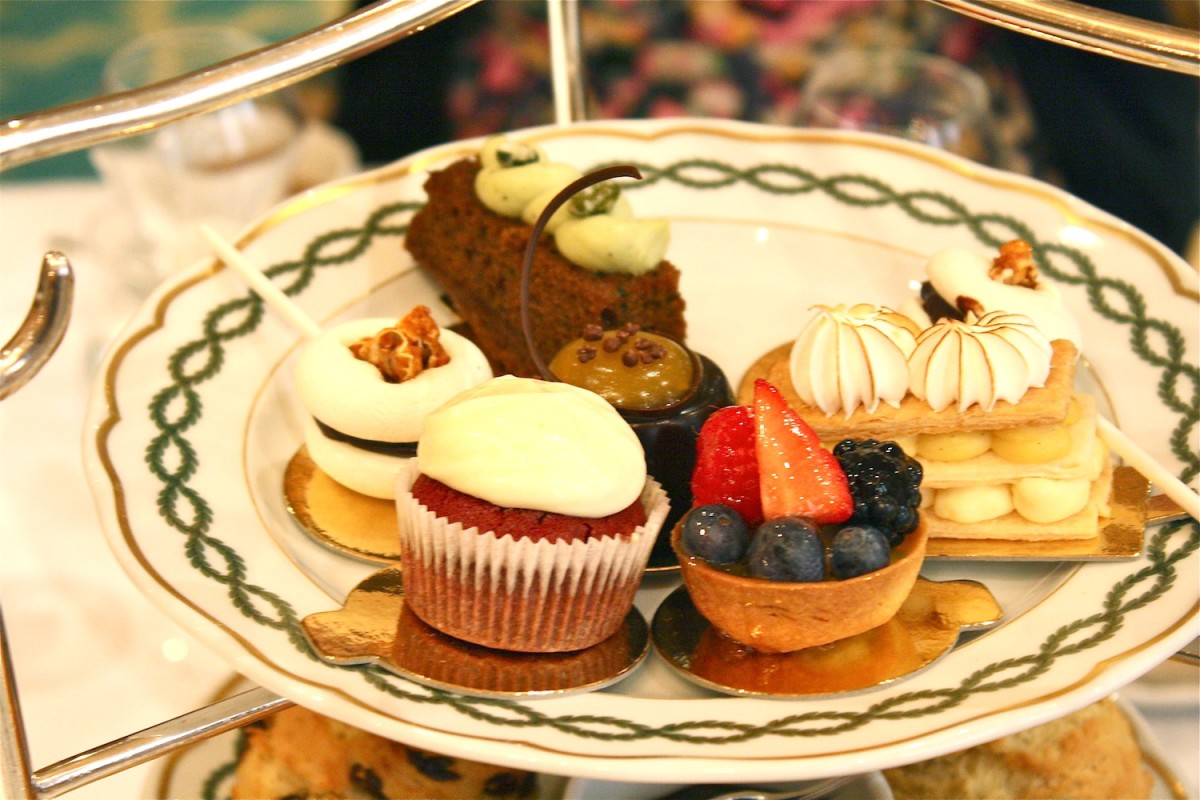 Once the tower of treats was brought out, I looked around at the seven other women at my table and thought to myself that this was definitely not enough food. I thoughts were quickly cut off with more plates of sandwiches, scones, and sweets were set around the table. Phew, more sandwiches for me everyone. 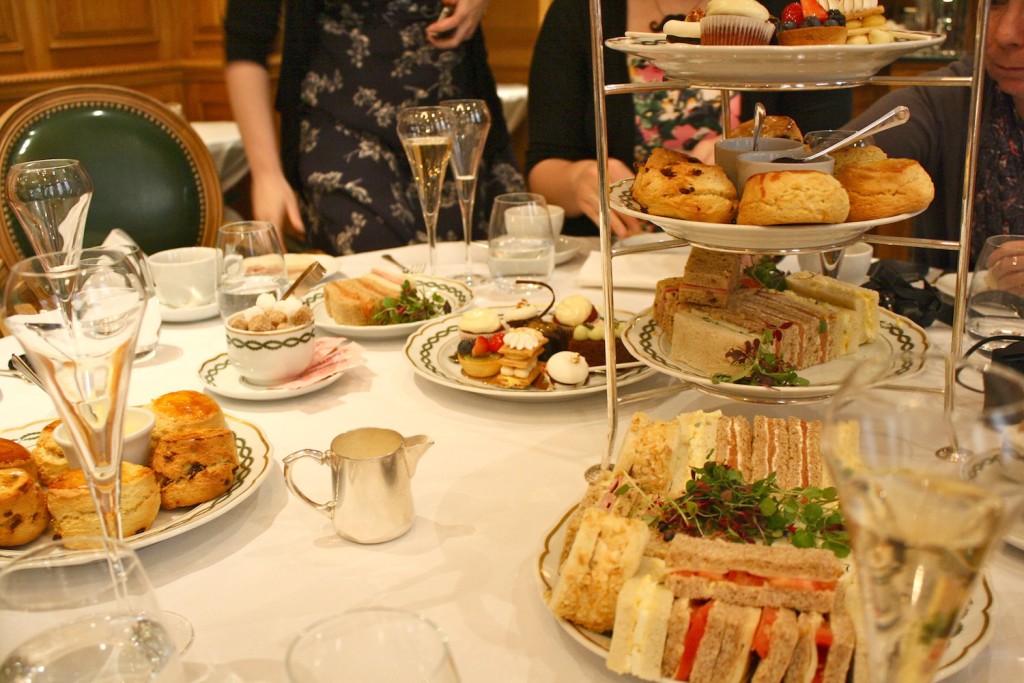 The sandwiches on offer were a round chicken mayonnaise crusted with almonds, cream cheese and cucumber (which I didn’t even know existed, told you we were the eating table), egg mayo (of which I probably ate the most of, sooo good), smoked salmon and cream cheese, tomato and cheddar, and the traditional ham as well. I know some people that attended said the bread was a little dry, but to be honest everything I ate was pretty tasty. That could be the fuzzy head talking. 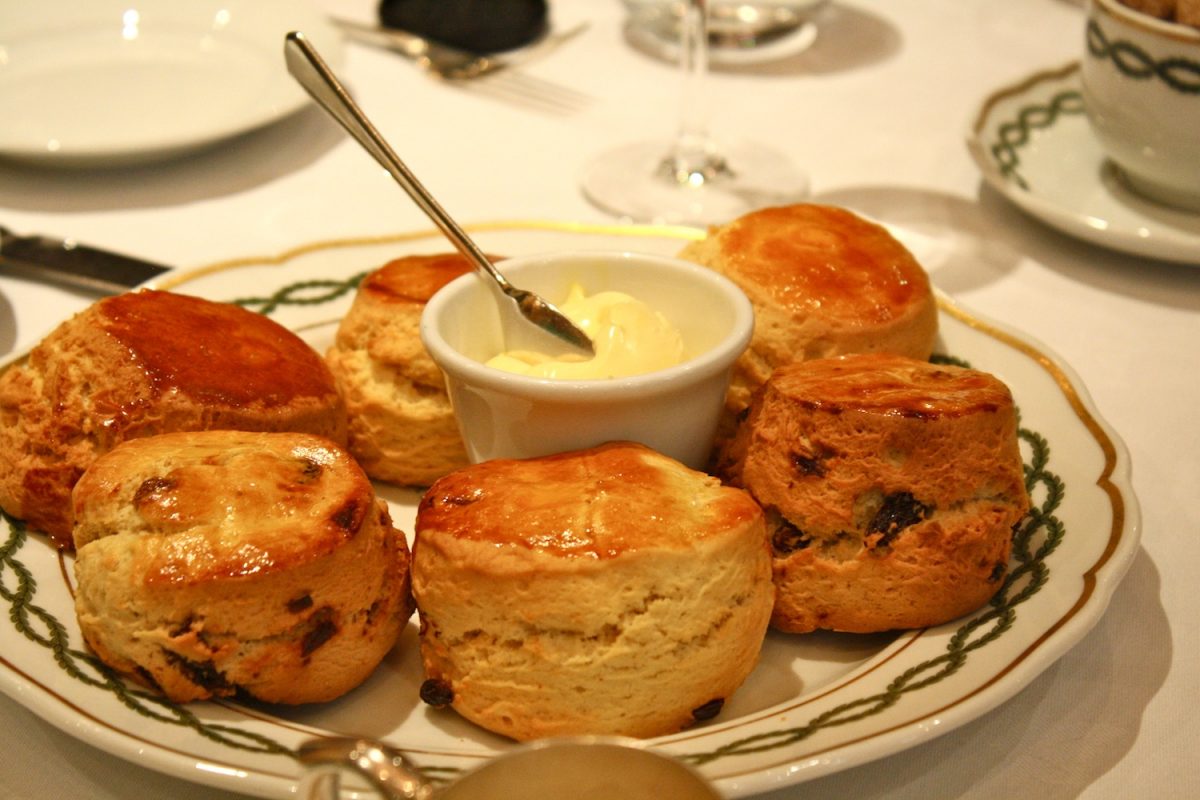 The part I was actually most excited about were the scones. Glorious glorious scones with jam and clotted cream. I’m on a bit of a scone kick lately after spending the first couple years in England not thinking I liked them. How silly! There was only two little pots of cream on the table, but when we asked for more it took a mere ten seconds for them to appear with more pots seemingly out of nowhere.  The service was really good considering we were such a large group. 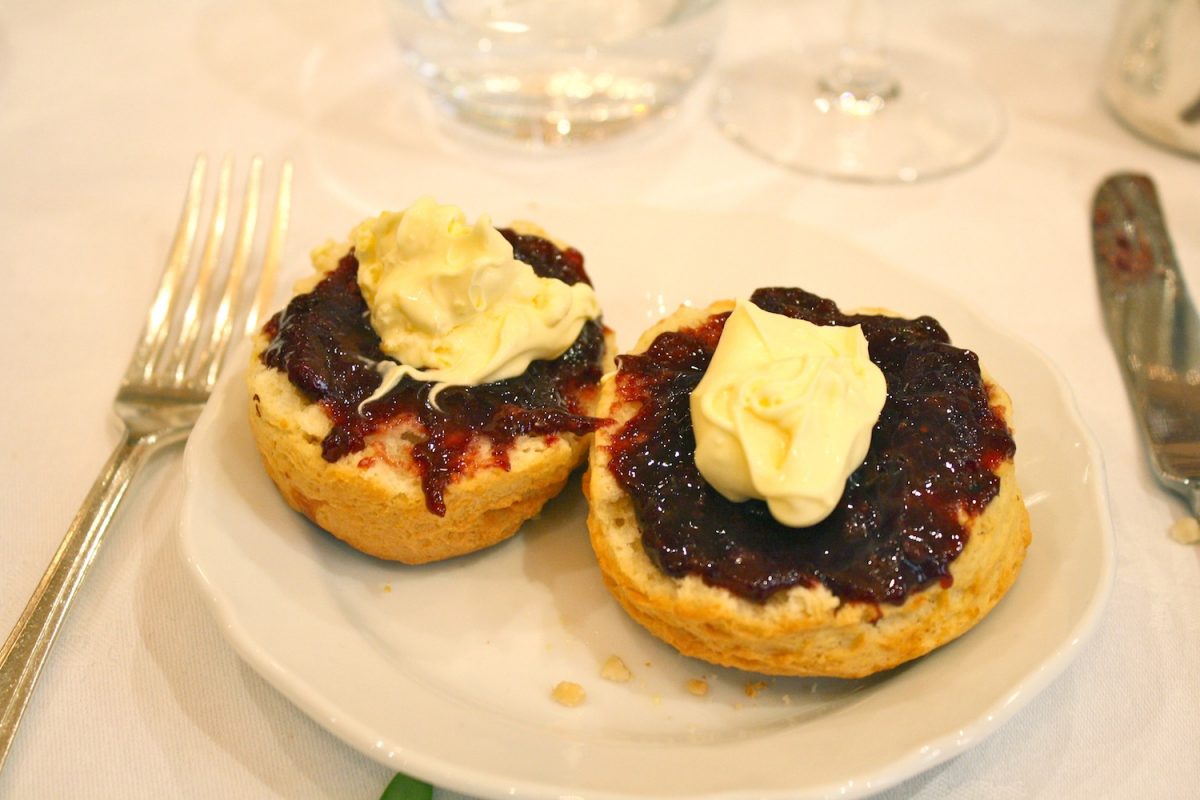 Do you jam then cream, or cream then jam? Apparently this is important. 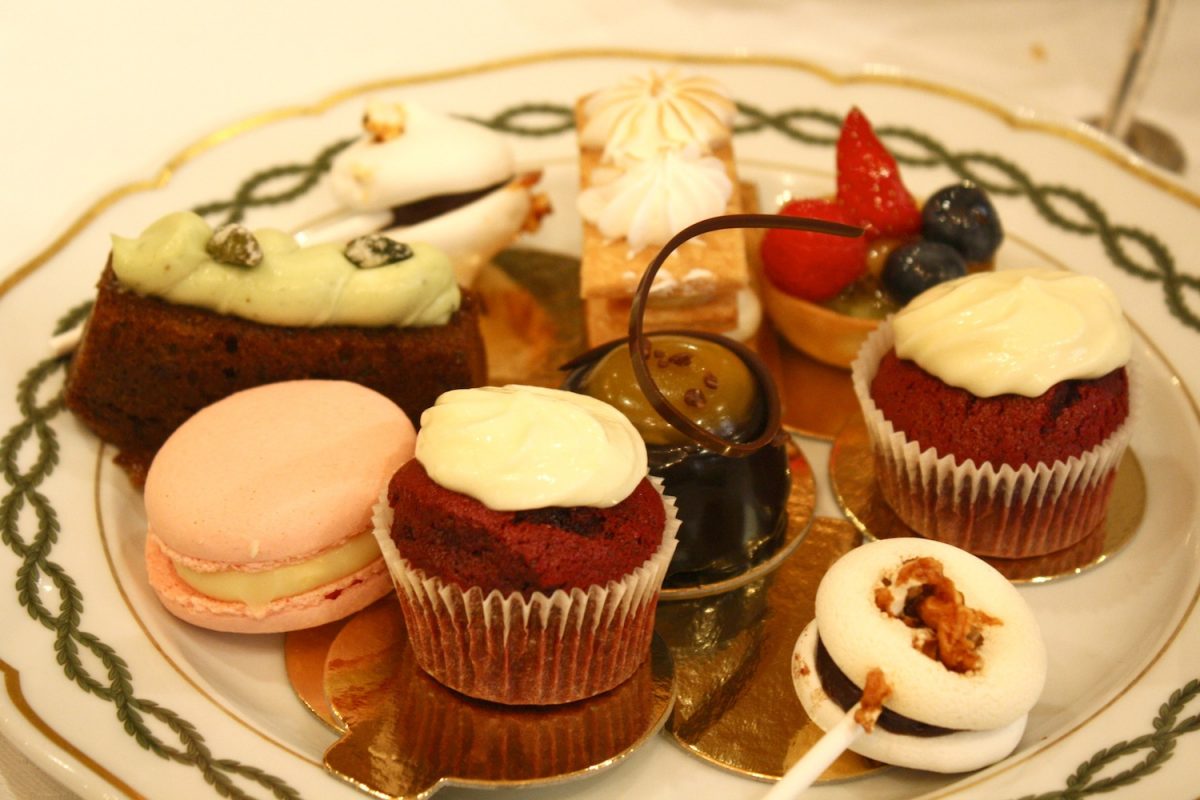 I wasn’t particularly excited about the sweet selection I suppose, but was intrigued by a chocolate blobby in the middle of the plate. Anything chocolate and I’m sold. It had a caramel looking disk on top, which I was NOT a fan of. Weird consistency, like hard gelatin, and a weird flavour. The chocolate bomb however was delicious, and so rich it was the only desert I had. Such a strange thing for me. Instead I went back for some leftover sandwiches. Just call me the sandwich monster.
The only thing I was really disappointed with was that we only had two options of tea to choose from, Early Grey or English breakfast. The part I was most excited about was getting to choose and try different teas. I understand that it was easier to offer two choices, as the staff were regularly coming around refilling the tea cups, but I’d have preferred my own pot of tea that I had gotten to choose. 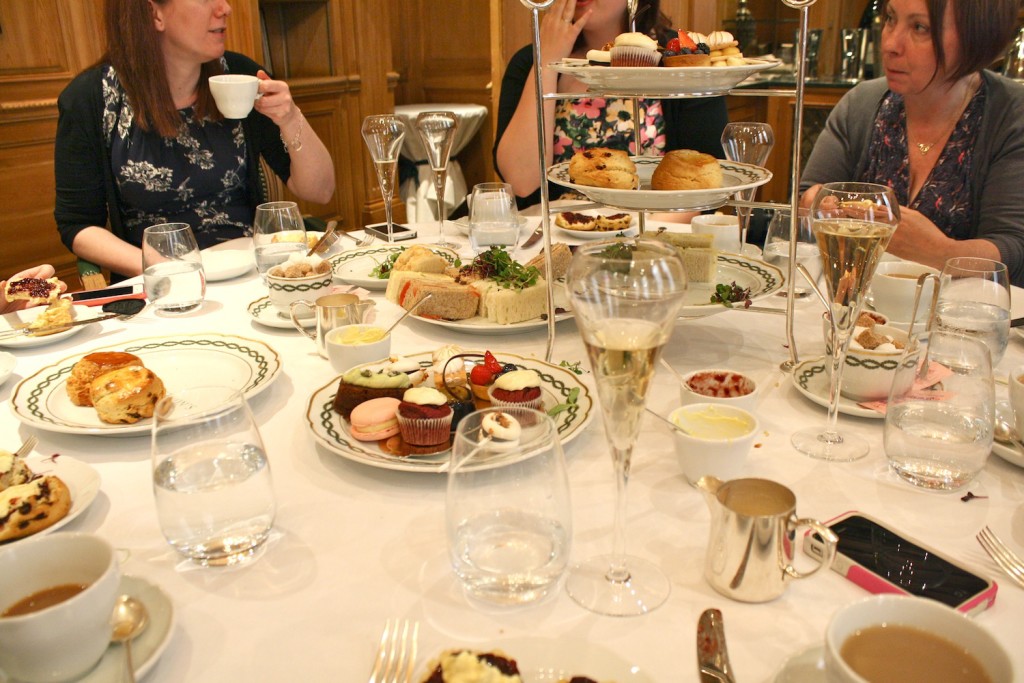 Even though the food was nice, the company was even better. I got to meet (and even sit between, I’m such a stalker) two bloggers I was really looking forward to meeting, fellow American Tina from Girl Meets Globe, and Jenna from 25 before I’m 25. I also met some new bloggers which was the great part of attending. I don’t think we stopped chatting the entire day in between bites of food. A couple of other bloggers I’ve followed for a while that I also got to meet were Kelly from Around the world in 80 pairs shoes, and the lovely Selena from Oh, the places we will go who organised the whole event. She was a great host from start to finish, and I’m so glad she started organising these afternoon teas as a way of bringing bloggers together. 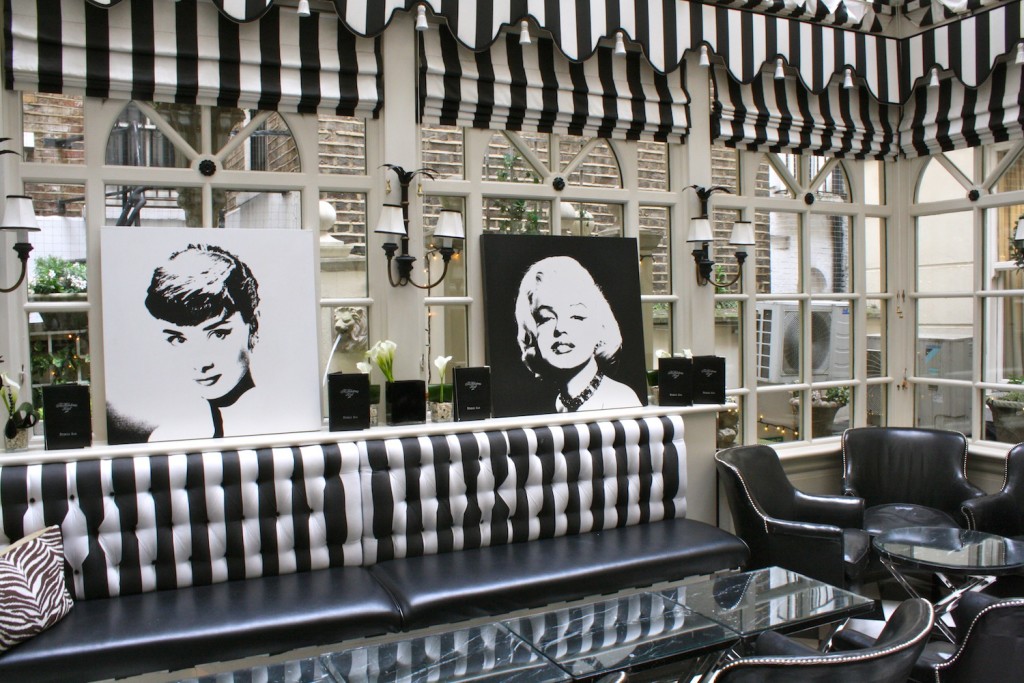 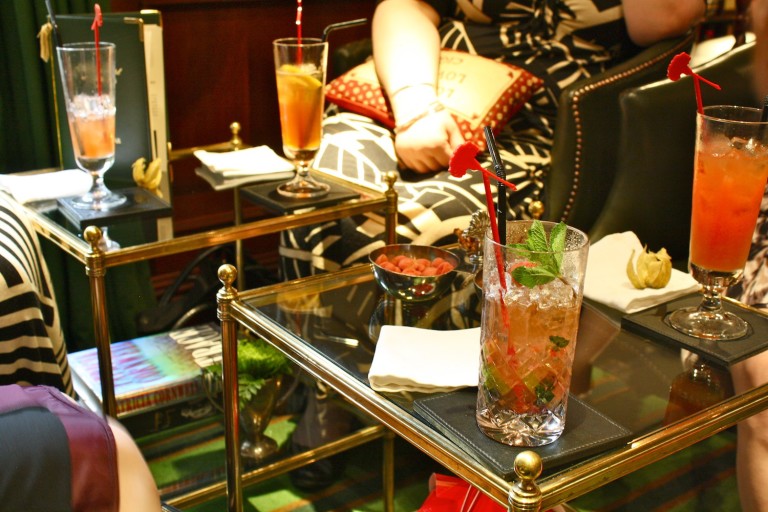 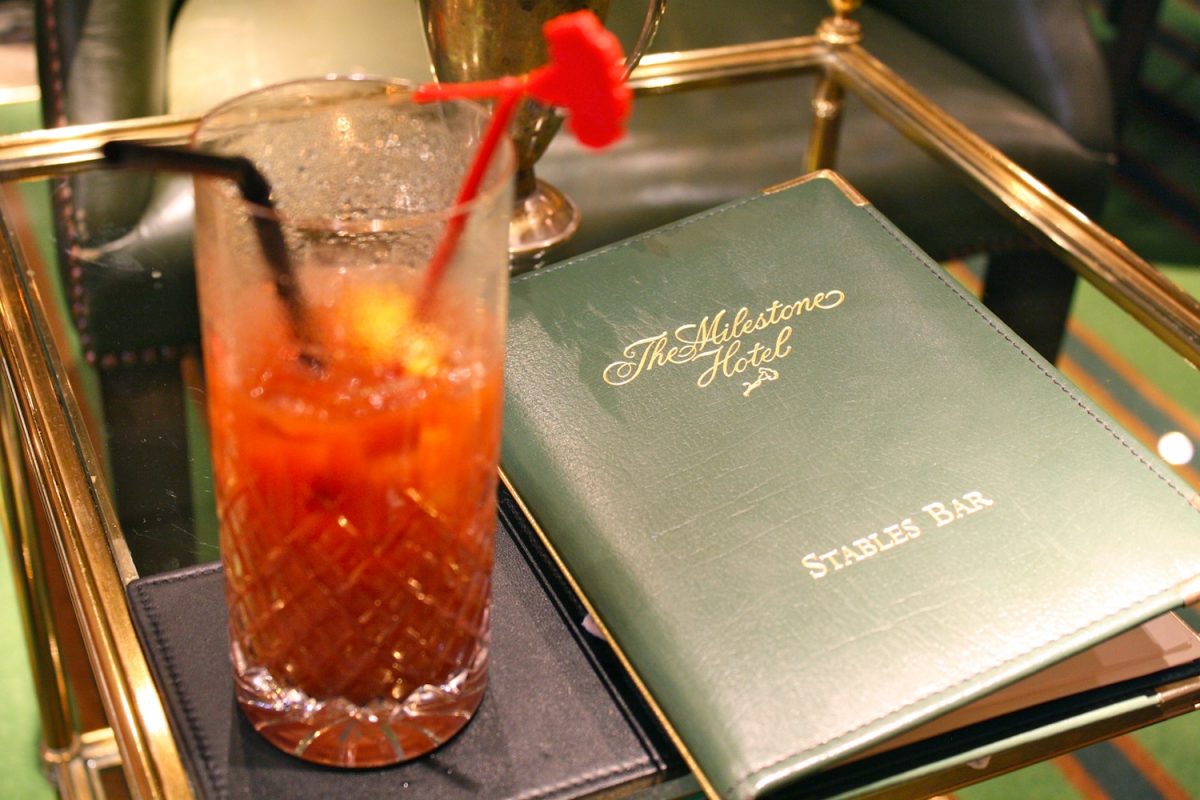 After the tea, Emma, Jenna, Kelly, Ngaire and I decided we hadn’t had enough of talking and went for a drink in the hotel bar. The cool thing about this hotel was that every room was completely different! The bar had a horse racing theme, and the conservatory off of it was done up in black and white. I would have loved the chance to see the hotel rooms as well, but being a Saturday I’m sure they were pretty filled up. In the bar I of course ordered a Bloody Mary, extra spicy, Jenna got the prettiest mojito I’ve ever seen with raspberries in, and the rest of the girls opted for juices. I was confused why a carnation came in my drink not understanding what it had to do with anything, but later learning that The Milestone Hotel is part of a group called The Red Carnation Hotel collection. After a quick browse around their website all of the properties are absolutely stunning.
After our pricey hotel cocktails, we took ourselves to cheaper pubs to carry on conversations. We dwindled until only Emma and I were left to get the tube home. It was such a great day, and exactly what I needed. It’s hard working from home sometimes as you don’t get to meet new people very often, but I met a whole room full of the loveliest women who all shared the same interests in traveling and this weird blogging thing of documenting our lives. It was so interesting hearing everyones stories on how they ended up in the UK, and where their favourite travel destinations were. I can’t wait until the next one! Thanks again Selena, you’re a star!