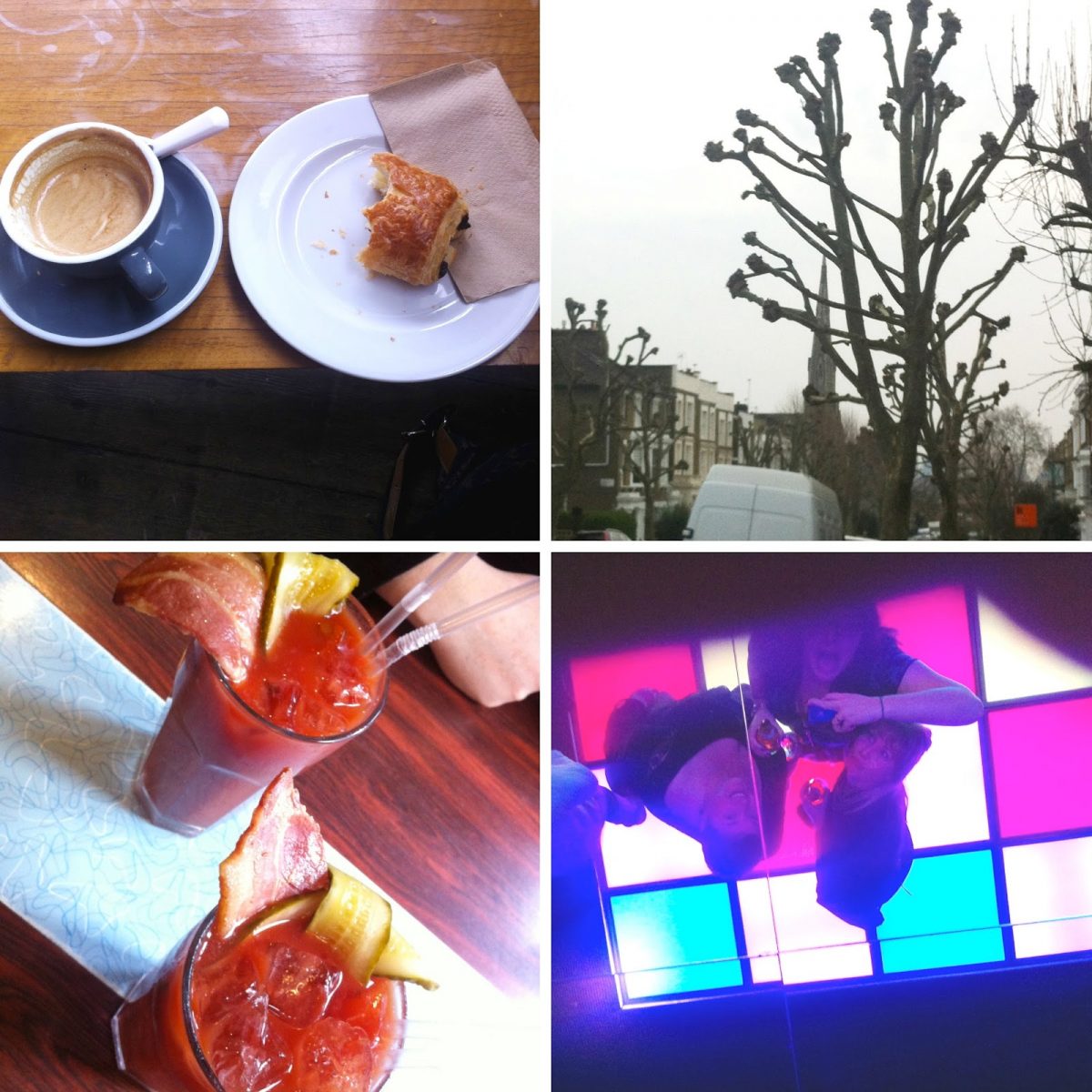 {Coffee break // Strange looking trees // Bloody Mary Brunch // Light up the dance floor}
Sooo this is a few days late. I got back from London on Monday from a nice long weekend, and planned to write this up Tuesday. Then life got in the way, and we had to deal with our poor fluffy kitty not being able to sort his blood sugar levels out. A trip to the vets, then the emergency vets, and a day later, and he’s back to his same old self, thank goodness. Scary times nonetheless.  On to happier things, London trip! This is pretty much all I got up to last week. I spent Friday with a one of my favourite people Lauren who I met in NZ, and it was sooo nice just mooching around with her, and then getting crazy later on a dance floor in the back of a pub in Angel.
Saturday night I met up with two of my favourite bloggers Amanda from Rhyme and Ribbons, and Emma from Adventures of a London Kiwi. It was so nice to be able to meet them after following along with each other for so long. This was the first time I’ve ever met up with anyone I’ve ‘met’ through blogging, and normal people would say they were a little nervous, but I was honestly just excited to meet some like minded people. We definitely didn’t lack for conversation, all three of us are quite chatty! 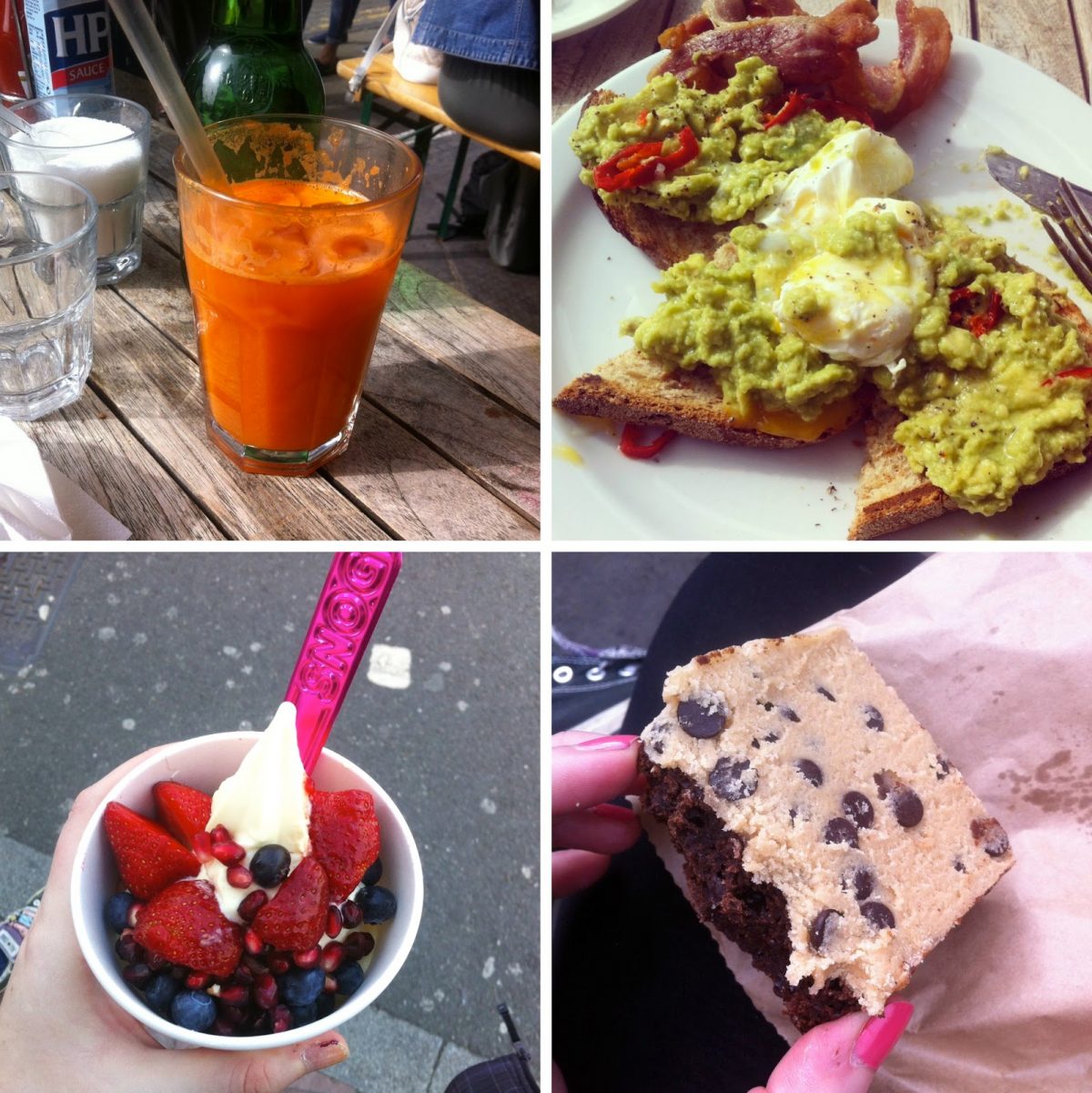 {Power juice // Power breakfast // SNOG // Heaven}
** Sunday I made sure to take Fran to The Breakfast Club as she’d never been before, and any I’ll take any excuse to go. I told her we had to be there before 11 so that we could avoid the massive crowds, and I don’t think she really understood how crazy it would get. When we got there we only had to wait about five minutes to get a nice outside table as the sun was shining and it was pretty warm. As soon as we were seated, about ten minutes later the line was around the corner. We went to the one in Angel, and like I said, if you get here before 11, you’re normally safe.
** Saturday I had my first Snog, which is just frozen yogurt that you can put whatever toppings on that you want, since I was a bit hungover I went with the healthy option and it sorted me out, and was soooo tasty.
** Then I went unhealthy with a cookie dough brownie from a bakery stall in the food part of Camden Market, and oh man, I was full from breakfast but couldn’t stop stuffing it into my face. 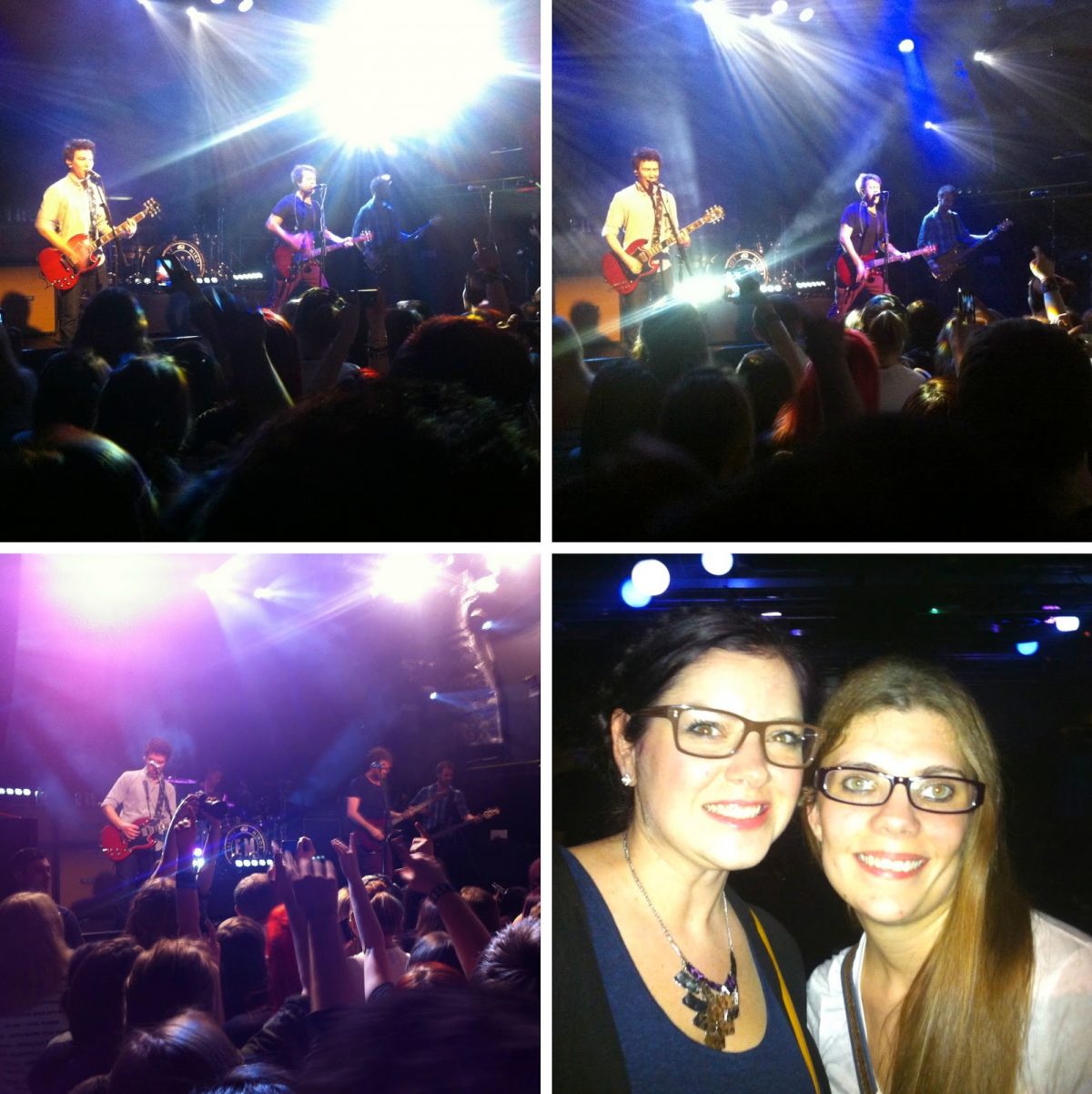 {Concert vibes}
The whole reason I joined Fran for the weekend was that one of her favourite bands Elliot Minor was having three comeback concerts, as a sort of final farewell. She’s not convinced it will be their last. She used to follow along with them on tour so was super excited to snag tickets for the Saturday and Sunday concert. Apparently the Friday one sold out in half an hour so they put the other two dates on as well. I actually thought they were really good! It took me back to my high school days going to gigs for sure. Might have to borrow Fran’s cd’s now 🙂
So that’s it really! I didn’t do the typical things people do when they go to London, but most of the time when I go anymore it’s to visit friends and just chill out along the river. I’ve got a full weekend this weekend, working at a seminar on Saturday and a friend’s baby shower on Sunday, so I will need another weekend to recover from my weekend!
Back to regularly scheduled programs around here hopefully next week. I’ve got lots of places to share with you.