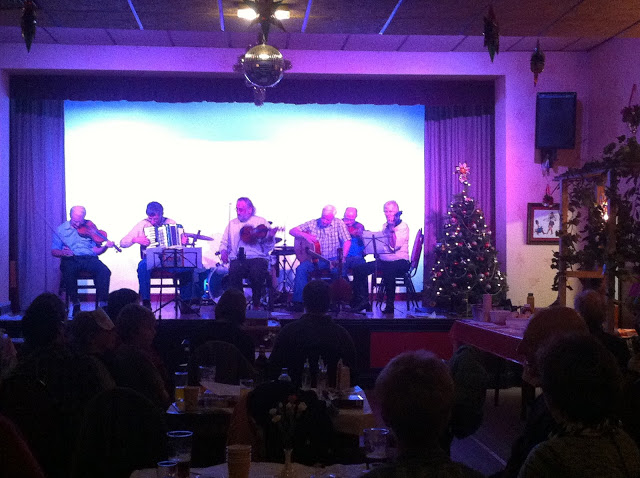 Every once in a while we head out to do something not really knowing what to expect. This past Friday Adam’s dad invited us to a club he plays music at on Mondays, as they were having a Christmas Extravaganza. He wasn’t sure what to expect either and just said there will be some food and acts performing, including him and his friends playing music.

Inside the function room it was festively decorated for Christmas, and after grabbing drinks, we were told to head for food. On one side of the room there were dishes from the Ukraine, mince and rice stuffed into cabbage leaves, perogies and more, and the other side was filled with German treats, sausages, a traditional German soup, potato salad and trays full of cookies. We opted for sausages and potato salad and headed back to our table.

The shows that were put on were great. They did a Goldilocks and the three bears, with the script in German and English. They told us it had never been rehearsed but they did a great job and had the audience laughing along with them as they read through their lines. There was a group who sang Ukranian songs, then some people got up to sing some traditional english songs.
The last act of the night was Adam’s dad and his friends playing folk songs and traditional Christmas carols. By this time everyone was feeling even more festive with their bellies full of delicious food and mulled wine and merrily sang along to the carols.
It was the best atmosphere and everyone was friendly. Sometimes when you walk into a room full of strangers you feel out of place, but we didn’t here at all. I even made friends with an older couple that was sat next to us who gave us some skiing vacation tips. Their tip – head to Andorra, skiing is good and is a lot cheaper than say Switzerland. Thanks to Adam’s dad Steve for inviting us, it was a great night!
Have you ever gone to any Christmas parties where you didn’t know anyone?
Previous Post
Next Post